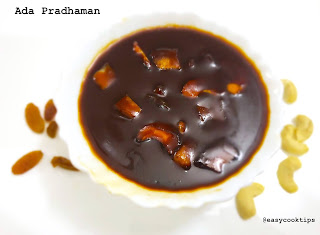 Ada Pradhaman Recipe With Homemade Ada | How To Make Rice Ada For Payasam Without Banana Leaf | Kerala Special Payasam Recipe with Video Recipe. The most celebrated Kerala festival, Onam is just around the corner. Hope you all are getting ready for the onam celebration?.Onam celebration is incomplete without the onam sadhya. Sadhya is a feast consisting of a variety of traditional vegetarian dishes served on a banana leaf. Payasam or dessert is an integral part of the onam sadhya. Today I am sharing here with you the recipe of a payasam made with rice ada, jaggery and coconut milk. It is known as Ada Pradhaman. You can make ada payasam with rice ada, sugar and coconut milk also, It is known as Palada Payasam. I am sharing here the recipe of ada pradhaman. We usually use store bought rice adas for making these payasams, but this time I thought to make ada for payasam at home. First I thought it is difficult to make ada at home for payasam. Once I tried I came to know that it is very easy to make ada at home for payasam. Traditionally payasam adas are made on banana leaf but in this recipe, I am making ada without banana leaf. So I think it will be useful for the people who wants to make payasam adas at home, but they don’t have banana leaf for making payasam adas.  Here I am spreading the ada batter on a steel plate and then steaming it, if you want to make payasam adas on banana leaf, then just spread the batter on a wilted banana leaf. Roll the banana leaf tightly and tie it with a string and then steam it. Once you made adas for payasam at home in this simple method, then you will stop buying adas for payasam from store. Just try this recipe and let me know your feedback