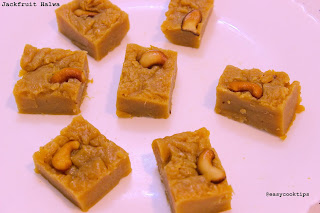 Jackfruit Halwa Recipe | Easy and Healthy Jackfruit Halwa Recipe with Video Recipe. Now it’s the season of jackfruit, here comes a recipe that you can try with ripe jackfruit, which is delicious and easy to prepare halwa recipe. This halwa’s preparation is similar to that of the “chakkvaratti” which is very popular in kerala, Chakka varatti is nothing but jackfruit Preserve. It’s preparation is very simple. First we need to make a puree of ripe jackfruit, then we will cook the jackfruit puree in jaggery syrup until it gets thickens. then we will add ghee into this mixture and cook until this mixture starts to leave from side of the pan and ghee starts to release from the mixture. We can store this mixture as it is in an air-tight container for long time. In kerala ripe jackfruit is preserved for long time in chakka varatti /jackfruit preserve form. U can use chakka varatti for making chakka payasam, chakka ada and chakka uniappam.  For getting halwa consistency, in this recipe of jackfruit halwa I have made a slight variation to the traditional chakka varatti/jackfruit preserve recipe. Apart from the normal ingredients of traditional chakka varatti/jackfruit preserve recipe, here I have added one more ingredient, that is cornflour. I made a cornflour mixture by adding water into it . Added that to the jackfruit jaggery mixture. It will reduce the cooking time as you will get the thick consistency of the mixture in very less time. I have made this halwa in a nonstick kadai, it will help the mixture not to stick in the kadai. Otherwise it will be difficult for you to cook the halwa, if it’s sticking in kadai. So try to use a nonstick kadai/pan for cooking this halwa as it will reduce the cooking time. It is a healthy halwa recipe as we are using jaggery instead of sugar for making this halwa. Unlike other halwa this halwa has longer shelf life, if we store it in an air-tight container. If properly stored in an airtight container you can use it for almost a year. Try this recipe if you have jackfruit in your house and let me know your feedback